As I said in an earlier post, one of the things I wanted for Grrbls was every possible status effect possible and then a whole bunch of new ones. And since I’m adding a jillion status effects, it also makes sense to have every weapon type possible to. But holy cow was it hard to figure out how to make each weapon unique. If you have an action game, I think you can give weapons different weights, swing styles, ranges, and damage. But when it’s a 2D game without real time motion mechanics, you need to be more creative on exactly how you create unique and varied weapons.

Some weapons in Grrbls

It was really hard to figure out how to make each weapon feel unique, impactful, and of course viable. I had experimented with a number of systems, but the fallacy of variety in most of them was that while I had different weapons, many of them were not worth their difference. It reminds me of this demotivational poster I saw: 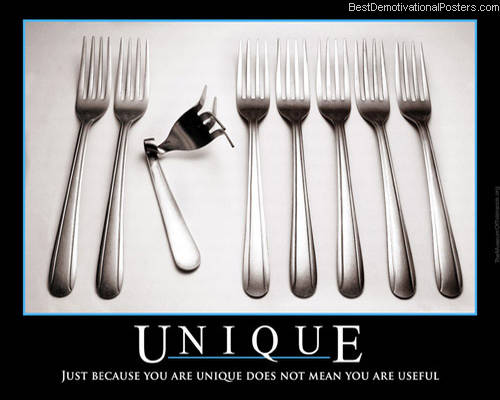 This is real weapon variety in a nut shell

I wanted a weapon system that felt impactful in terms of expression and intensity. And it needed to tie in with the other core systems of the game. Eventually I came up with a system where weapon types (e.g. sword, controller, toilet bowel scrubber) are linked to class actions. So if you equip a sword, you can then use Knight actions, since swords are a knight weapon. In addition, the differences between weapons of the same type will have variance in terms of what stats they boost. So there is the macro (class type differences) and micro (stat differences) that will hopefully make every weapon in Grrbls feel fun and unique and encourage lots of build variety.