The main reason this game has been taking foreverrrrr is because my whole focus has been on a battle system that is (hopefully) infinitely deep without being overly complicated to get your head around. I want the emergent gameplay to be diverse but the core mechanics immediately obvious. Since this is a 2D game, and there’s no movement, this proved to be a more intricate issue than I first expected. 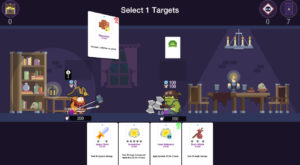 A debug view of the battle system

After many prototypes I do have something I think players will enjoy. Its a 3v5 battle system where each unit gets its turn based on when their speed gauge is filled. There are no mana costs, and MP isn’t even a stat in the game. This was something I was set on being a rule, but it surprised me how hard it was to make interesting game play without a mana system. If you’ve played Hearthstone or Magic the Gathering, you know that more powerful units cost more mana. It makes sense to, more mana cost = more power. By having a mana system one can design cards based on a power curve of 1 mana cost to the max (usually 9). This inherently gives you a baseline with which to balance. But take away the mana system and try to balance a game like Hearthstone or Magic the Gathering and suddenly many cards are rendered redundant.

I really struggled how to handle this redundancy without a mana system but I ultimately was able to settle on a speed system which accommodates differing power levels. Add to that I also have a loot system with several tiers of rarity and I believe we have an interesting, non-mana based combat system.

I think not having mana takes a lot of cognitive load off the decision making in terms of “what can you afford” and shifts to towards “what should you do”. Each unit will have a set of moves (which the player crafts, but we will leave that to another post). That unit has unlimited uses of that move, but some moves will have a speed adjustment. This speed adjustment might speed up or slow down your next turn (and therefore give diversity to the choice and a risk-reward system + a power curve where slower actions can be more powerful and visa versa).

I wanted to get as close to a card system as possible but I ultimately found, after many prototypes, that actually drawing cards each turn did not work — and this is because there was no mana system. One of the things that makes games like Magic the Gathering and Hearthstone work is that there is a momentum built up each turn. Each turn the player is more powerful and their turn is more deadly. With Grrbls, this did not work at all because there was no way to “build momentum” within a particular battle. You have your move-set and it doesn’t change, so there can be no “more deadly” each turn. However the idea of deadly momentum is an exciting and critical part of the game, and since this is single player, I have been able to achieve this momentum via a combination of the battles and the dungeon itself.

I will talk more about the dungeon progression in another post, but the key point for now as it pertains to the battle system is that your health is constant throughout the whole dungeon. As it stands right now, so too are any afflictions you pick along the way (they will persist between battles, so if a unit has poison, it will start the next battle with poison). This adds gravity to each battle where winning will have gradients. If you win with a lot of health that will make you more able to complete the dungeon, if not you might need to retreat.

On top of the persistent health system, there will also be a rising danger system. Each “tick” in battle increases the danger. When the danger rises enough a new advantage for the dungeon will appear making it harder to progress. This danger system accomplishes a few things. First it adds momentum to the dungeon making the further you go deadlier. Second it punishes players who want to leave just 1 enemy and heal themselves before moving forward — but it doesn’t remove the choice to do so. This means players can weigh the risks and rewards of prolonging a fight to patch up a bit vs danger rising and offsetting the rest of the dungeon run. Lastly it adds depth and variety to the game with emergent game play. The player will need to learn and adapt to various dungeon hazards as it will affect what choices they will choose to make in battle.

That wraps up this brief intro into the battle system, but there will be plenty more interesting tidbits to come!